War of the Spark has produced some really interesting new cards that are potentials to see eternal play. Today I am wanting to talk about Vivien, Champion of the Wilds. Let’s break her down. 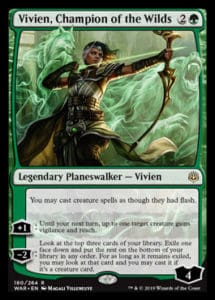 Vivien, Champion of the Wilds
2G
Legendary Planeswalker – Vivien
You may cast creature spells as though they had flash

[+1]:Until your next turn, up to one target creature gains vigilance and reach

[-2]: Look at the top three cards of your library. Exile one face down and put the rest on the bottom of your library in any order. For as long as it remains exiled, you may look at that card and you may cast it if it’s a creature card.

Maverick can get Vivien online as early as turn two thanks to access to mana dorks and recent testing with Ancient Tomb. This makes Vivien somewhat more appealing than the four and five mana Planeswalkers you regularly see in Maverick, as you can play around much more countermagic on the play. The downside of a 3-mana walker however is that it can be cleanly answered by Abrupt Decay.

You may cast creature spells as though they had flash.

This ability seems really powerful. We know that Yeva, Nature’s Herald will never see competitive play in Legacy Maverick, but when comparing this to how Death & Taxes takes advantage of a Legacy staple such as  Aether Vial, there are some consistencies.  Aether Vial has the added bonus of your creatures being un-counter-able, the ability to bluff your opponent when you actually have nothing and lastly but most importantly, the ability to keep the specific creature a secret before it’s too late and on the battlefield. Flashing in a Gaddock Teeg, Thalia, Guardian of Thraben or Spirit of the Labyrinth is much different to activating an Aether Vial for two as it leaves what’s about to hit the board up to your opponent’s imagination.

Imagine being able to keep your creatures in hand until the end of your opponent’s turn to give them pseudo haste. This means you have the ability to play around cards like Toxic Deluge, Supreme Verdict or even Terminus for at least a turn. Want to flash in Gaddock Teeg in response to a miracle trigger? Sure! Want to get Thalia, Guardian of Thraben down in response to a Snapcaster Mage targeting Swords to Plowshares with only a single mana open? Done! An instant-speed Scavenging Ooze seems great against Reanimator, Loam and other graveyard-based archetypes.

Flash allows you to play around counter-magic and hand disruption to some degree. It gives you the benefit of being able to play in your opponent’s turn, casting creatures that if countered, gives you a little more free rein during your turn. Her static ability also applies pressure through uncertainty. If you control a Vivien, a Miracles opponent can no longer feel safe to cast a Jace into an empty board. Tapping out only to be ambushed with threats is an element of fear Maverick has never had against decks like Miracles.

[+1]:Until your next turn, up to one target creature gains vigilance and reach.

This may look like a weak ability at first glance, but in a creature-heavy deck, this has all sorts of potential for abuse. Even if it only means you can attack with a Noble Hierarch or Mother of Runes while holding up their activated abilities, it also gives you an out to the age-old dilemma ‘do I attack with my Knight of the Reliquary or use its ability to Wasteland my opponent?’ 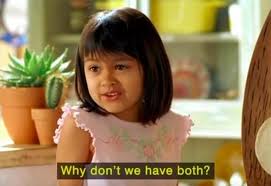 Reach is also huge in a metagame of flipped Delver of Secrets, Pteramanders and Marit Leige. Now Mother of Runes can not only block a 20/20 but also protect herself before damage! Also note due to the wording of ‘up to one creature’ you can tick up Vivien even without a creature in play.

For those of you playing Palace Jailer, vigilance goes a long way in applying pressure while ensuring your opponent doesn’t have a chance to get through your defences and take the crown for themselves.

[-2]: Look at the top three cards of your library. Exile one face down and put the rest on the bottom of your library in any order. For as long as it remains exiled, you may look at that card and you may cast it if it’s a creature card.

This is a very cool ability, especially when you understand this is just extending your hand. Your opponent now needs to take into consideration these extra unknown cards that act like a second hand but cannot be hit by hand disruption. This ability works really well with Sylvan Library, allowing you to set up the card you exile with Vivien’s ability. This is why I don’t see Vivien as a replacement for Library, but more so a synergistic tool and another way to provide the deck with card advantage. Just remember the first card you get to cast from her -2 ability is only going to replace her as a drawn card so you’ll only be creating actual card advantage once you use her exile ability at least twice.

But she’s a Planeswalker with no ultimate?

I don’t see this as an issue and here’s why. Vivien’s abilities allow the pilot to create card advantage, and that’s how you win Legacy games. How often do you see players ultimate Jace, the Mind Sculptor for the win compared to those who grind out card quality with his 0 ability? I believe ultimates can sometimes be misguiding and cause players to divert from one great game plan to an all-in ‘let’s ultimate this walker’ mentality.

Out of Lightning Bolt range straight away? Fantastic! However if you’re wanting to start looking at some extra cards AND play around Bolt, you’re going to need to grind out a few more turns. I see Vivien best against Miracles, so Bolt isn’t too big of a talking point for the sake of this article. I would be more cautious of Snapcaster Mage against Miracles where, if you use Vivien’s -2 ability after casting her, he could take down her in one foul swoop.

Yes. Vivien seems like a house against heavy control decks like Miracles and Grixis Control yet also relevant against other fair decks like Death & Taxes.  Being able to defend the skies isn’t a skill Maverick has traditionally had outside of Swords to Plowshares but Vivien can really produce some pressure there.

Vivien is a powerful Planeswalker that gives Legacy Maverick another source of card advantage. The price of playing her is most likely slots that creatures could be filling. Is that worth the benefits of Vivien? I feel testing is the only answer. I cannot wait to try a few in my maindeck and start producing some real data from there.

4 thoughts on “Vivien, Champion of the Wilds – Maverick’s Best Planeswalker?”