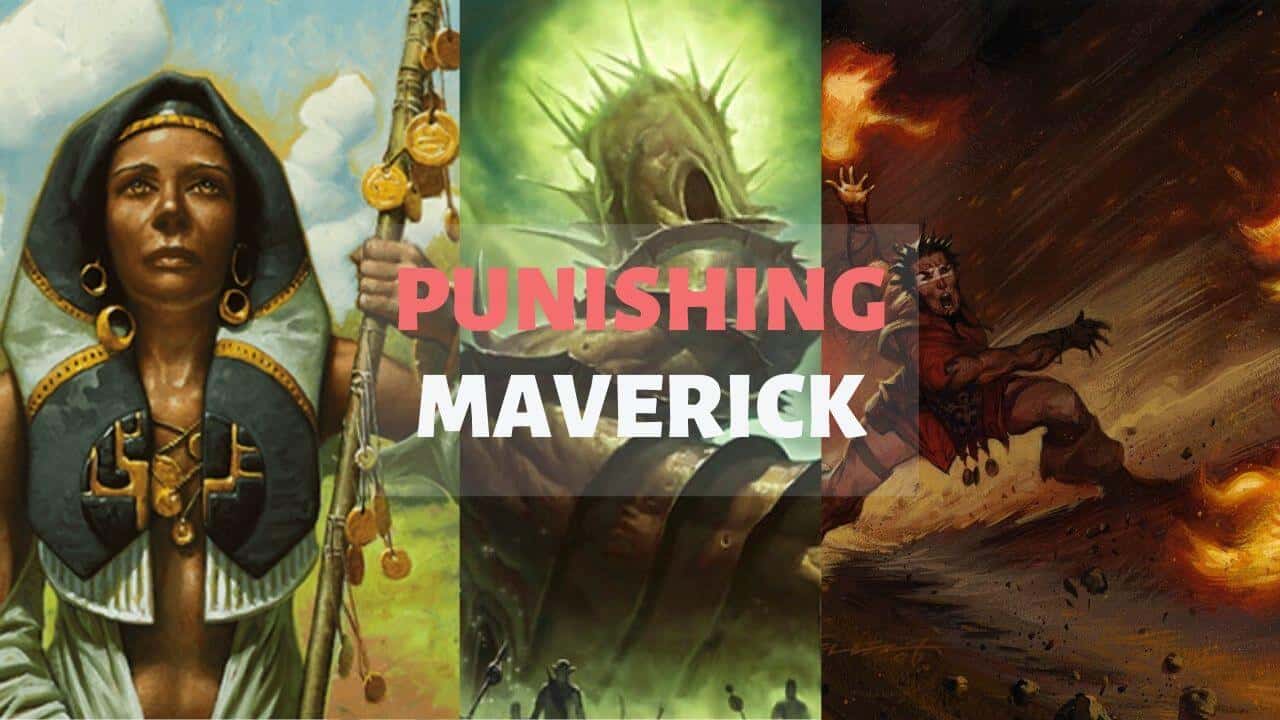 As the name gives away, Punishing Maverick takes advantage of the synergy between Punishing Fire & Grove of the Burnwillows within a traditional Maverick build. 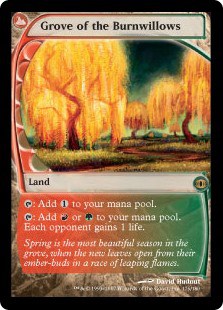 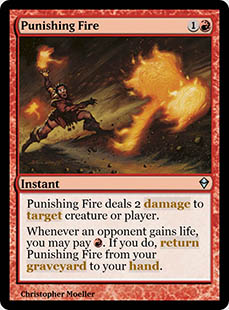 Citing the Maverick Primer from MTG The Source, “Punishing Fire was first adopted in Maverick decks at the end of 2011, primarily as a way of gaining an edge in the Maverick mirror. It turns out that the Punishing Fire + Grove of the Burnwillows combination slots very naturally into a GWx Maverick shell for several reasons.“

This build is great against a fair metagame as the additional removal in Punishing Fire moves the maindeck Thalia, Guardian of Thraben‘s to the sideboard. This isn’t the only reason though; the 3 Grove of the Burnwillows and 1-2 Taiga ‘s also means your white sources are quite vulnerable.  If you know your local meta well and know it’s dominated by creature based decks, you’re going to have a great experience with this deck. However against combo archetypes you are really going to feel the absence of the distributive element that is Thalia, Guardian of Thraben in game 1. The main reason you cut Thalia’s to the sideboard is because of how mana intensive the Punishing-Grove synergy is. Thalia’s tax can keep you from firing off multiple Punishing Fire‘s in a turn and actually have more of an effect on your gameplan than your opponents. 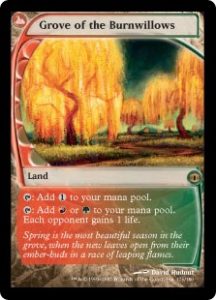 The Grove / Punishing Fire synergy is great for shooting down creatures turn after turn, getting planeswalkers off the battlefield or even slowly burning your opponent to defeat. The big difference between more traditional Maverick builds and Punishing Maverick is that Punishing Fire is recursive removal. It allows you to pressure your opponents life total, creatures and planeswalkers without adding to your boardstate. As the usual Maverick build plays very much on the battlefield, with this variant you don’t have to go as wide as usual and open yourself to sweepers.

Another advantage of playing the ‘combo’ in your deck is Grove’s synergy with Knight of the Reliquary. Through Knight‘s ability you can also tutor up a Grove of the Burnwillows on command so with a Punishing Fire in the graveyard, Knight can act as a removal suit too. This also means you don’t need to play the full playset of Groves giving you more room for forest and plains based lands for Knight to use at your will.

However Grove of the Burnwillows is not the only way to get a Punishing Fire back in hand. Swords to Plowshares gives you access to another way of returning Punishing Fire from your graveyard. 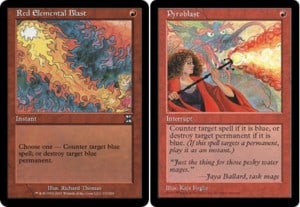 The additional of red in your manabase also allows you to play some strong control and combo sideboard cards such as Red Elemental Blast and Pyroblast. These and Thalia both shore up your combo and control matchups for games 2 and 3 most likely replacing the Punishing Fire‘s and some number of Swords to Plowshares.

Although over the past few years we’ve seen an increase in 4 colour variants that run the Punishing Fire Combo alongside Chalice of the Void, Mox Diamond, Life from the Loam and Dark Confidant. However this isn’t to say 4C Loam has taken the place of Punishing Maverick as although the decks have similarities, they also have some big differences which I’ll go over in a later article.

Mark Strassman is a well known Punishing Maverick player who’s had some really nice finishes with the deck. Below you can see him take on Reid Duke on Elves and well, I’ll keep the outcome for you to view yourself.

Below is Mark’s list from his top 4 finish at Dice City Games in Maryland’s Quest for Power event. You can also find his list from his 7th place finish at the 290 player Eternal Extravaganza in 2016 here.

Above the Horizon – Punishing Maverick with Wrenn & Six

Note: Wrenn & Six is now banned in the Legacy, however I believe this information is quite important for players to know how good Wrenn was and what sort of impact it had on the format. 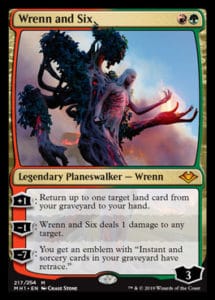 Wrenn and Six has had not only a massive impact on the format, but also on Punishing Maverick. Miranda Keith was one of the first to play with Wrenn in the deck and had some great points in this Reddit thread.  Wrenn gives the deck a new way to attack your opponent, a way to add another threat to the board without going wide with creatures. This is great against decks with sweepers like Toxic Deluge and Terminus which threaten the effectiveness of your go-wide beatdown strategy. Being able to answer creatures like Baleful Strix, Delver of Secrets, Dark Confidant, Mother of Runes (on the play), Young Pyromancer, opposing mana dorks like Noble Hierarch, Birds of Paradise and Dryad Arbor and even work alongside Punishing Fire to deal with x/3 creatures is a huge bonus.

Wrenn also opens up the possibility of running some number of cycle lands (Scattered Groves/Sheltered Thicket) and also Ghost Quarter in the slot of either Wasteland #4 or an additional utility land. The ability to go after basic lands in Legacy right now is highly relevant especailly against decks like UW Stoneblade and Miracles. Ghost Quarter can also act as a Strip Mine against decks that don’t run basic lands such as RUG Delver and sometimes Eldrazi.

Does Wrenn actually make some of our poor matchups better?

100% yes. This is the only real question that should be asked when looking to add a new card into your deck. Does this card improve our bad matchups and not just increase our win % against our already solid matchups? Wrenn is great against go-wide strategies such as UR Delver, Goblins or Elves, hard control like Miracles or Grixis and also fair matchups like Death & Taxes and the mirror. Where Wrenn doesn’t add too much to our gameplan is against fast combo archetypes like Reanimator, Storm and to a slower extent Sneak & Show.

Below is a 5-0 list Miranda ran through a MTGO Legacy league. Renegade Rallier get back Wrenn & Six anyone?

One card you will see missing from this list is Punishing Fire. In Miranda’s opinion, the mana intensive name sake synergy of the deck is just not worth it now that Wrenn is an option. I can understand this thought process and to be fair there aren’t many relevant creatures that Wrenn can’t deal with that Punishing Fire can (Monastery Mentor, a flipped Delver and Stoneforge Mystic is the main card that comes to mind but Maverick in general has a solid matchup against equipment based decks). I also agree that when Deathrite Shaman was in the format, answers like Punishing Fire were much more needed. Here’s Miranda’s take on Pushing Fire right now in Maverick;

I think the card (Punishing Fire) just straight up sucks in Maverick. It’s a good card, but Maverick is generally trying to play almost a tempo game with Thalia‘s and Wasteland‘s, and Punishing Fire is like the anthesis of that. If it were possible to just have like two copies of Punishing Fire in the sideboard without f**king up our maindeck manabase I’d consider it, but I think it’s not even remotely where the deck wants to be and you’re better off playing 4c Loam if you want to go that route. Playing Thalia and Punishing Fire in the same deck is bad, don’t do it. – Miranda Keith, Top 8 GP competitor with Maverick

Reddit user RegularMother also had some great points about the advantages of both Punishing Fire & Wrenn in Punishing Maverick:

I also took a similar list to Miranda’s (however with 2 Punishing Fire) through a MTGO league to a 4-1 finish via my stream.  You find find my previous leagues with Punishing Maverick via my YouTube channel.

I feel that 4C Loam is a big deterrent of many could-be Punishing Maverick players. Mox Diamond and Chalice of the Void along with cards like Dark Confidant and Liliana of the Veil really allow 4C Loam some incredibly fast starts and gives you game against a large portion of the field.

However, there have been many players like Mark Strassman who have stayed true and are still putting up solid results with Punishing Maverick.  Here’s a list he took to a Top 4 finish at the Dice City Games Legacy Rumble on the 9th of February 2020 including a spicy inclusion – Klothys, God of Destiny. 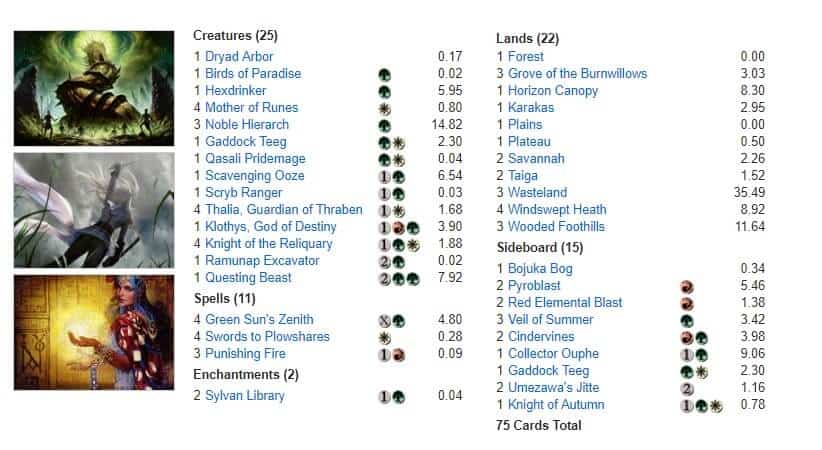 If your local meta game has an abundance of fair decks, make sure you make room for the Punishing Fire / Grove of the Burnwillow’s synergy in your Maverick deck to really take your game 1 percentages to another level . The ability to have reoccurring removal isn’t something other Maverick builds have access to and can be very powerful in the right meta.

Being able to side in Pyroblast & Red Elemental Blast‘s against blue decks can really help you take down G2 & G3 where the lack of G1 Thalia, Guardian of Thraben might hurt your ability to close out a match in the first two games. Blast effects are currently the best way to answer an Oko, Thief of Crowns -on the stack as a 1 for 1.

Punishing Maverick has a huge amount of game to it, and just when you think 4C Loam has stolen its crown, it puts up another hard fought result.