The birth of Legacy Maverick

Maverick as we know it today made it’s debut in the Legacy meta game in early 2011 with the release of Mirrodin Besieged and the printing of Green Sun’s Zenith. The deck, traditionally a GW midrange toolbox deck had been around before this and made use of the card Survival of the Fittest. Like its sister deck Death & Taxes, Maverick runs disruptive creatures like Thalia, Guardian of Thraben & Mother of Runes and lands such as Wasteland and Karakas. The deck is able to disrupt its opponent while also beat down with large threats like Knight of the Reliquary, Tireless Tracker or other troublesome creatures. 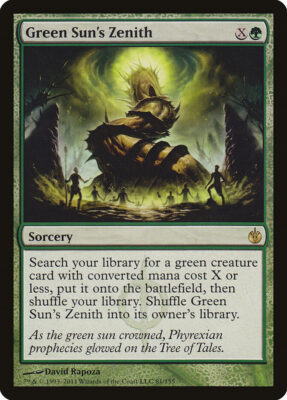 Green Sun’s Zenith (GSZ) allows the pilot to run one-of matchup silver bullets like Gaddock Teeg and Scavenging Ooze and yet have access to a virtual 5 copies within the maindeck. This allows the deck to be filled with creatures that synergies really well together and as one, are a serious power house.  GSZ also gives the deck an element of flexibility, able to aggressively combat any local meta by switching around the silver bullet targets to what’s going to perform well.

The name of the deck has a few different origin stories. Below you can see Todd Anderson discuss why it’s called Maverick, however MTG The Source says the name is a tribute to a MTGO player who popularised the deck with the screen name [email protected] (Luis Viciano).

“The reason they called it Maverick because Maverick means off the radar – doing something that isn’t normal.” – Todd Anderson

MTG The Source’s Maverick primer also states at the first versions of Maverick were based around Aether Vial (see below) rather than a Zenith value deck, however the printing of Green Sun’s Zenith put the deck over the top. This was all of course after the banning of Survival of the Fittest in the Legacy format in December of 2010.

Treetop Village, Weathered Wayfarer and Ghostly Prison? Although Maverick in 2010 is quite different to what we have access to now, the core of the deck is still very much the same. In fact a green-white based Aether Vial deck is what drew me into the Modern format with GW hatebears so the thought of a competitive list in Legacy only brings an overflowing level of excitement to me.

The Evolution of the deck

As you can see above the deck started off (and arguably is still strongest) as a green-white creature-based deck, however had expanded since then to Punishing Maverick, Dark Maverick, BANT and even 4/5c versions. Since the banning of Survival, the deck has been hit with some big ups and downs. The biggest impacts on the deck have most likely been the printing of Thalia, Guardian of Thraben in 2012, the Treasure Cruise and Dig Through Time era in 2014/5 and also the banning of Deathrite Shaman in 2018. Wrenn & Six also had a pretty huge impact on the playablity of the deck, as many of the creatures we rely on in the early game have 1 toughness. Wrenn also diminished the real value of Wastelanding opponents, and allowed many to get back in the game once they landed the now banned 2CMC planeswalker.

Thalia, Guardian of Thraben really gave the deck a spot in the format with one of the greatest game 1 threats against blue based combo and control decks. A card that some players still to this day may concede to while it’s still floating on the stack, Thalia plays a huge roll in allowing a fair deck like Maverick stay in the game against some of the formats more broken archetypes. I believe one of the main reasons Maverick has been out of the limelight over the past 3 or 4 years is due to the rise in popularity and finishes of Death & Taxes. You can hear more about Maverick and it’s history through a podcast I did with King, called Archetype Influencers.


Recently Maverick has been gifted a few nice printings in threats like Hexdrinker, Questing Beast and  Shifting Ceratops, disruption in Collector Ouphe and  Veil of Summer and some new tech. with  Once Upon a Time. In 2020, Maverick seems very strong, with multiple archetypes putting up solid results in both paper and online.

Here’s a great example of how Legacy Maverick can come back from any potential issue:

Here are some of Maverick’s best finishes in Legacy events.

*A continuous work in progress thanks to TC Decks