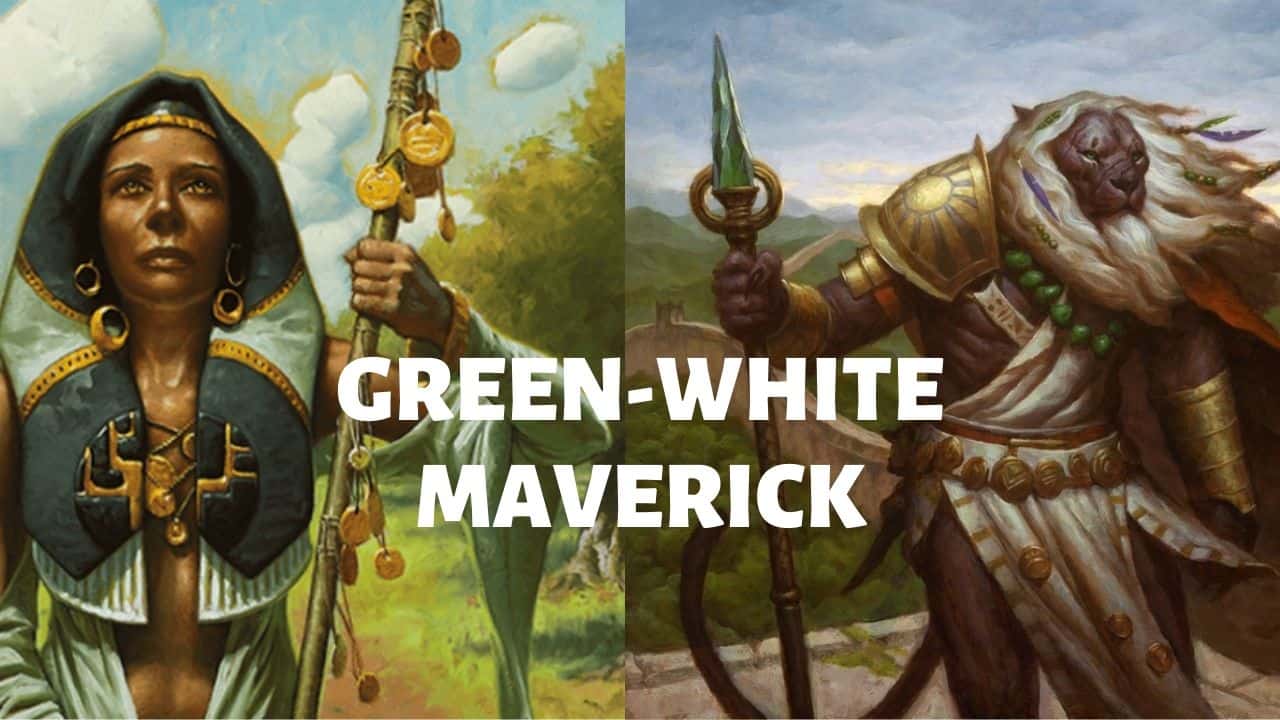 Maverick is a green white (GW) deck at its core. Straight GW is the build I would advise all new players to play and use to get comfortable with the deck. But what is Maverick? I really couldn’t have put it better than S3raphix:

“Maverick is a GWx creature-based midrange deck that contains both aggressive and controlling elements. The most important aspect of the deck is a toolbox of “hatebears”, disruptive creatures that hinder the opponent’s game plan, which can be tutored for and protected. In a sense, the goal of Maverick is to lock out the opponent with an overwhelming board presence.”

“Maverick is built on synergy rather than raw card power, and is flexible enough to have game against almost any strategy. While intuitive to play at a basic level, Maverick is a difficult deck to master, as it is very interactive and has many lines of play available. If you want to play a deck with creature interactions and toolbox elements, Maverick could be the deck for you!“ 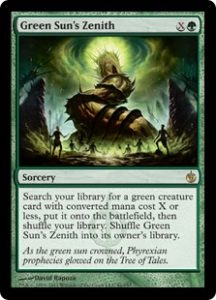 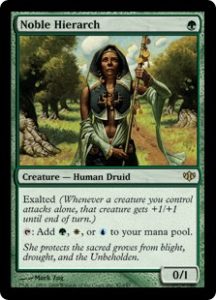 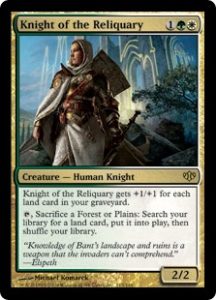 An early jump on mana gives you the advantage you need as a fair deck to have a chance to get in front of the non-fair decks in the format. What I mean by this is setting up your hatebears such as Thalia, Guardian of Thraben or Gaddock Teeg before your combo opponent goes off or your hard control deck gets the pieces they need to remove your creatures and setup control over the boardstate. 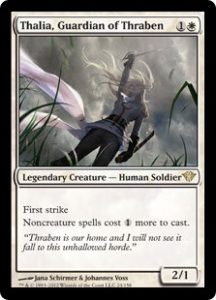 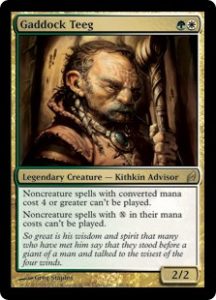 GW Maverick is a very fair deck when you compare it to some of the T1 decks of the format. You will most likely lose many, many games in a combo-heavy meta. You don’t do anything ludicrous like putting a horde of 1/1 Goblins or a 7/7 Flying creature into play on turn 1 – you’re playing Maverick for the grind. You want to slow down your opponent enough to pressure them through a boardstate made up of big and disruptive creatures.

If one of the best combo players to play the format thinks Maverick is underrated, you’ve got to know Maverick is a special deck:

Maverick is the most underplayed deck in Legacy. Everyone I know who plays that deck consistently crushes.

Here’s one of itsJulian’s most recent lists which packs a huge amount of combo hate in the board with the full playset of both Surgical Extraction and Ethersworn Canonist.

For more information on the green white traditional version of Maverick check out this post from itsJulian as he navigated his version to a 5-0 MTGO League finish. I would say Julian is one of the best-known pilots for GW Maverick and has a great understanding of the deck. Dan Neeley is also a grand-master of the deck with a countless number of 5-0 leagues under his belt.

Below you can see Dan’s list from the recent Legacy Premier where he took the deck to a very impressive 7-1 finish:

Maverick has some pretty sweet new toys in Hexdrinker, Shifting Ceratops, Collector Ouphe, Questing Beast, Veil of Summer, Once Upon a Time and Deafening Silence to name a few. The maindeck hasn’t changed a whole lot compared to Dan’s list above.

Here are some of the best performing of the year so far from Achillies27, one of the best GW Maverick players on MTGO. 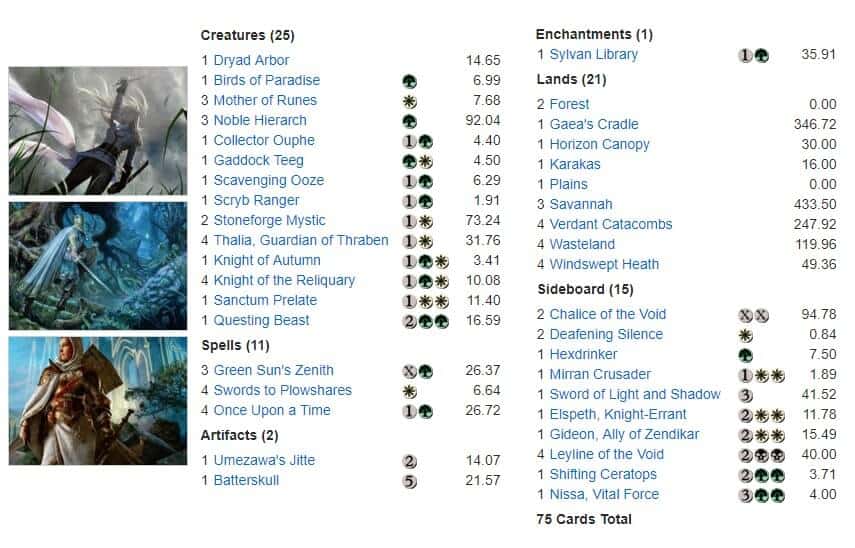 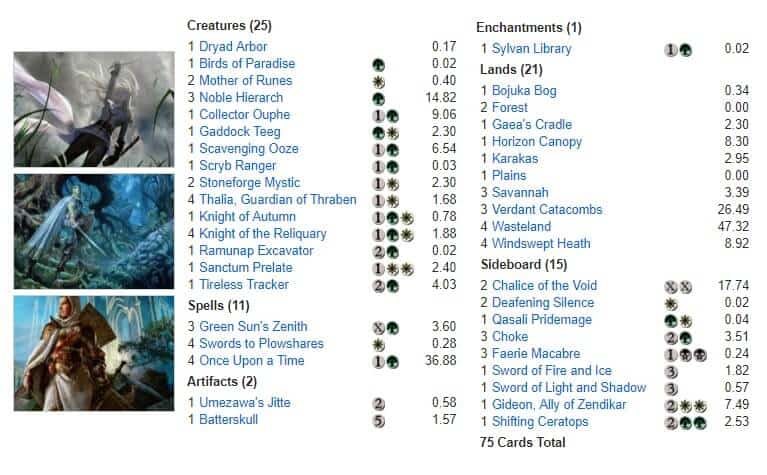 If you’re wanting to find gameplay and coverage, check out the coverage section or even better, check out my Twitch where I stream Wednesday’s at 7:30pm Australian Eastern Standard Time and Sunday mornings around 10:00am AEST. I usually stream Legacy Maverick, with all my videos also ending up on my Youtube channel.

The straight GW build of Maverick is a very powerful and consistent Legacy deck. Although extremely fair in comparison to the rest of the format, the deck has the tools to hate out the unfair decks and pressure your opponents with a quick clock.

The consistency that Green Sun’s Zenith brings to the 75 is probably the most important factor when it comes to Maverick’s ability to have a decent win/loss percentage against the Legacy field.

Legacy GW Maverick is a great starting point for anyone wanting to try the archetype, and an even better experience for those who enjoy creature-based magic.

Mine I've been working on: https://youtu.be/a8SRpZNm-nw