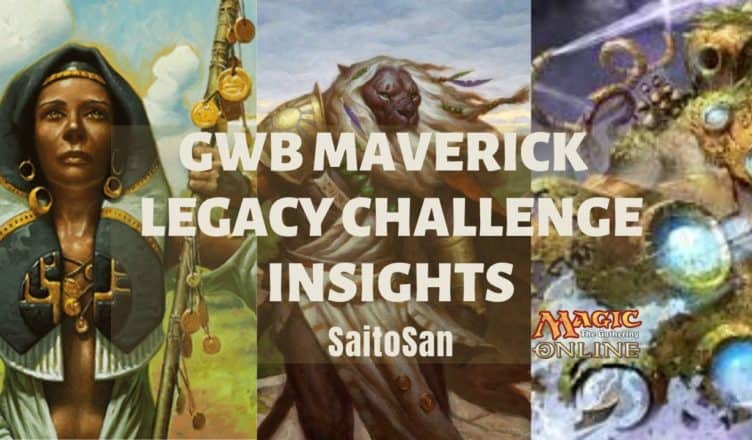 After last weekend’s Legacy Challenge on MTGO, a GWB Maverick list on Twitter caught my eye. Vinicius Saito (SaitoSan) took a pretty unique 75 through his first Challenge and came out the other side with an impressive 5-2 finish. 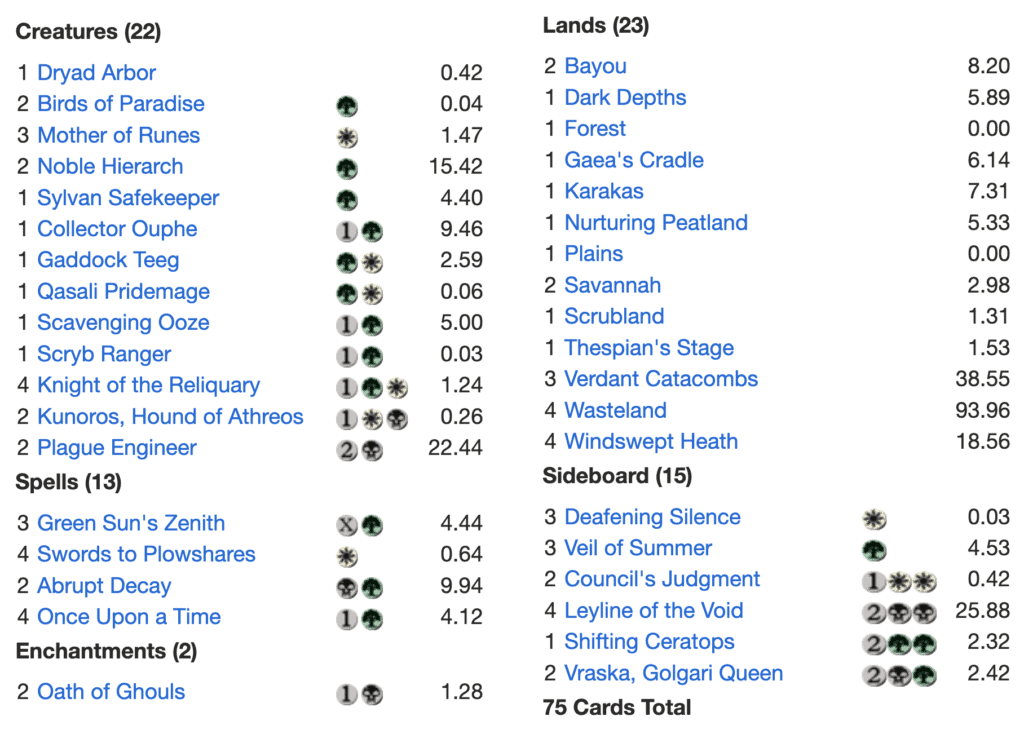 No Thalia? Dark Depths combo? OATH OF GHOULS?! I had to get onto Vinicius to throw some quick questions at him and thankfully he was more than willing to share some insights.

1. Vinicius! A huge thank you for your time and congratulations on your finish. Your list was really unique so I’d like to go over some choices. First up, what made you cut Thalia altogether?

Since Astrolabe and Plague Engineer were printed, I feel like Thalia has gotten very weak. Yes, it’s still great against combo decks. But Maverick has access to maindeck Collector Ouphe and old Gaddock Teeg that are not as fragile, and in the sideboard, Veil of Summer and Deafening Silence represent a package that are fulfilling the needs well against combo decks. 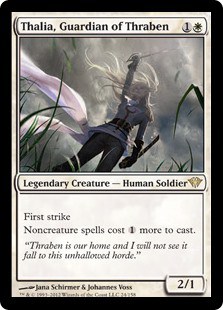 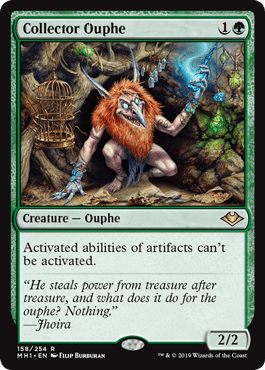 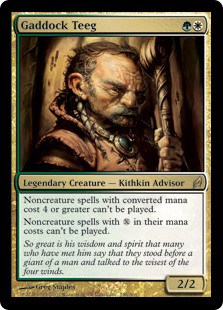 I also don’t run the equipment package, which Thalia used to shine with, and now her first strike is not that relevant anymore.
As hard as it was in the beginning (I couldn’t see myself playing Maverick without Thalia), after playing around 70 games without her, I don’t miss her as I thought I would.

Saito makes a great call when looking at how you want to fight combo decks. Thalia has largely been a 3-4 of in Maverick since her printing, but recent printings have seen the 2/1 come under some pressure due to a shift in her effectiveness in the current metagame.

By moving your reliance away from Thalia and onto green, silver-bullet creatures, you’re not only increasing your chances of finding disruption thanks to Green Suns Zenith, but also maximising your chances to go wider on the board.

Further expanding your portfolio of permanent-based disruption through enchantments like Deafening Silence and instants such as Veil of Summer in your sideboard makes it much harder for your opponents to have answers for everything you throw at them.

The equipment package in Maverick has also dropped off with some players looking to add maindeck planeswalkers, extra removal or further targets for GSZ with their spare slots. I think Oko was a huge reason players started to move away from the SFM package, but some players are still making it work, which is great to see.

2. What were you expecting maindeck Kunoros to be really good against? Do you think it makes the G1 much better against a certain deck Maverick tends to struggle against?

When Lurrus was legal in Legacy, players abused their graveyards as a resource, so I started testing Kunoros. It was a house against Arcanist and Lurrus, despite the fact that it is legendary was a problem when people where running Karakas everywhere. 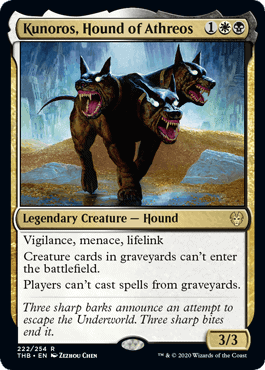 After the ban of the nightmare, I noticed an increase of Reanimator and Hogaak decks, combined with the most played deck RUG Delver, which best creature is Arcanist, so I kept playing with Kunoros.

One ability that people take for granted is menace, and that’s where Kunoros has its value against decks with planeswalkers. Those kind of decks – like Snowko, Stryfo Pile and Miracles – don’t run as many creatures. So they usually have just one to defend their walker, and Kunoros can pass by with its ability. Those decks use their graveyards a lot, so the hound can give them a hard time on that area too.

It takes a fair amount of work for a non-green creature to make it into Maverick these days, but I think Kunoros could definitely become more mainstream. Mirran Crusader is a great example of a mono-white creature that just slotted really well into Maverick and worked really well in a metagame where the human was pretty much a TNN against a large portion of the format (and arguably still is).

3. I’ve seen Oath of Ghouls pop up in Goblins from time to time. How did you like it here?

I started running Oath of Ghouls when Snowko was the most played deck in Legacy. Dead of Winter is a wipe board card so hard to deal with since Teeg doesn’t stop it. And it’s usually very rare to land a Sanctum Prelate on 3 protected by Mother of Runes or Sylvan Safekeeper. The idea was to get back the wiped or countered creatures and slam them back until opp can’t find resources to deal with them. 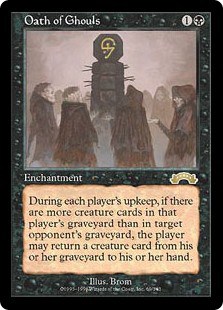 After Snowko dominance, I felt Oath was still better than Sylvan Library because first Lurrus decks, then RUG Delver and Oko decks apply pressure to your life total very fast, so we can’t afford to pay tons of life with Library like we used to in Snowko hell.
The card works great with Qasali Pridemage and Spore Frog (which I cut from the list to fit the second Kunoros).

This type of creativity is what I really enjoy about the Maverick community. Oath seems like a really cool card to try out in Maverick, and I know I’ll be testing it out over the next few weeks.

4. How did you board against each of your opponents?

5. What would you change (if anything) going into another MTGO league or challenge?

I’ll test a mix of 2 Surgical / 2 Faerie Macabre as graveyard hate. I’ve noticed graveyard decks are running 4 copies of Reverent Silence and 3/4 copies of Serenity, so they’re well equipped against Leyline of the Void. Another card I am willing to test is Eliminate from M21, since it deals with planeswalkers and creatures.

A huge thank you to Saito for the report and congratulations again for his finish. A big shout-out as well to the Brazilian Legacy community as a whole- there’s always at least one of you in my Twitch chat and always bringing up some interesting points. Brazil magic seems like a great community to be a part of so to see such a strong eternal community is really impressive. Have questions for the pilot? Reach out to them through Twitter! If you’d like to do a tournament report through the GreenSunsZentih or something similar, reach out!

What does Maverick gain from Splashing Black?