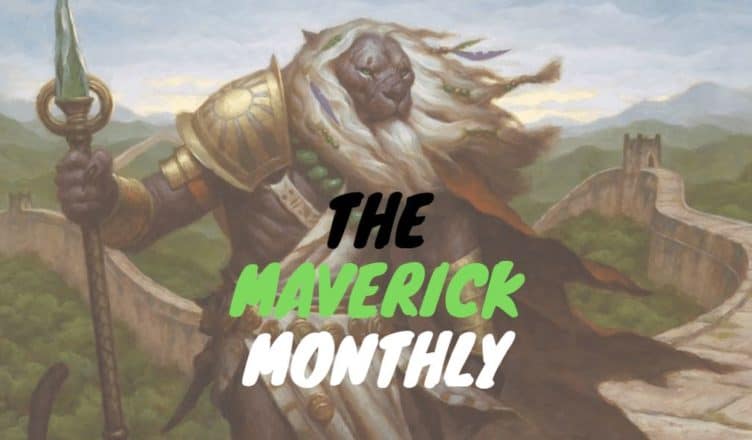 Hello and welcome back to the latest edition of the Maverick Monthly! Let’s be honest – the month of April was a little grim for Legacy with companions and, more specifically, Lurrus of the Dream-Den running rampant. It hasn’t been impossible to navigate to 5-0s in leagues with Maverick (evident by the lists below), but it definitely was not an easy time for the archetype.

Let’s have a look at some of the lists players were able to run through a league undefeated.

GW Maverick had the most success in undefeated leagues during April 2020. The deck is the most consistent of all archetypes, so this isn’t too much of a shock. Most of these lists look to resemble the 75 Achillies27 runs with – one of the premier GW specialists on MTGO.

Pohlman has the standout list here with the other three running very similar 75s (same maindeck) taking advantage of the Stoneforge Mystic package and Once Upon a Time. OUaT allows you to run fewer lands, Green Sun’s Zenith and playsets of creatures such as Noble Hierarch or Thalia, Guardian of Thraben to help boost the consistency of your games. 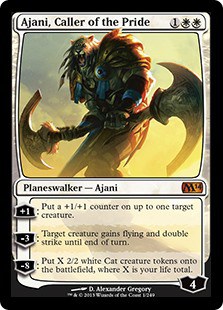 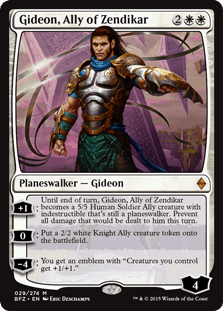 I really like Pohlman trying out Ajani, Caller of the Pride as a three-mana non-creature threat, a card I’ve seen MatsOle try in a previous 5-0 list. The (+1) ability allows you to play around cards like Plague Engineer and turn some of your more harmless creatures into game-ending threats. His (-2) ability allows you to push through a field of opposing Elks, Goyfs and Young Pyromancer tokens to either smack your opponent’s life total or take care of a threatening planeswalker. Having bigger creatures than your opponent but no way to get the damage through has been an issue for Maverick for a long time. So having trample – or in this case, flying – can make a huge difference in how quickly you can apply pressure.

Gideon, Ally of Zendikar is another strong metagame choice to combat some of the control decks like Snowko in G1. It allows you to also play wide into a Plague Engineer effect, a move that otherwise ends with disaster. Gideon also allows you to go wide on the board which is usually touch-and-go against decks running maindeck Dead of Winter and Supreme Verdict.

It’s really interesting to see Robfigthing, Tarksar and Bolas all playing the same maindeck 60, and a very similar sideboard only differing in specific numbers. Maverick is traditionally known as a flexible archetype, one where no two lists tend to be the same, which is why these lists stand out. The main difference is that Bolas has opted for 2 Gideon, Ally of Zendikar over Elspeth, Knight Errant.

I think it’s great to see GW Maverick pilots close in on such similar lists, as it brings more authority to the 75 and shows new players the best list to start with.

GWB is my favorite build of Maverick right now. The additional options for removal in Abrupt Decay and Plague Engineer are too hard to pass up.

Maindeck Plague Engineer seems to be the go right now. It does some great work in an Ice-Fang meta, stopping your opponent from being able to ambush attackers each turn. Engineer is also great against other creature-based decks, and a fantastic answer to Young Pyromancer and Dreadhorde Arcanist. 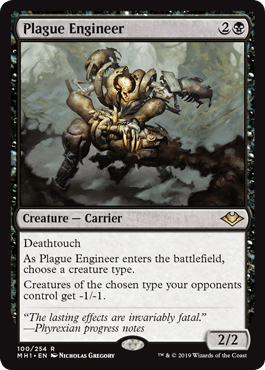 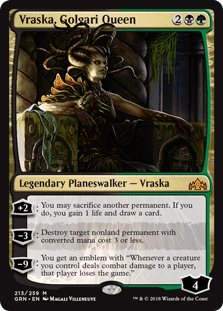 Vraska, Golgari Queen is the best answer to Oko, Theif of Crowns right now as she not only destroys the planeswalker, she sticks around after. I think maindeck Vraska is currently a great move and allows GWB Maverick to fight back against the high-value decks of the format like Snowko and Dreadhorde shells.

3 Sylvan Library is above the norm, but obviously Rob really wanted to make sure it was on the field in the first few turns. The best part about Library is that once it’s down, it allows you to put back and hopefully shuffle the other copies away. The snow-covered basics are just a technicality, giving your opponent some headaches when thinking about what they might be representing.

Giver of Runes is really interesting here as Mother #4, able to play around Engineer while protecting your legendary creatures from opposing Karakas (which has since experienced a rise in the format since the printing of companions).

Nihil Spellbomb is really nice in the sideboard as you’re able to replace it with another card once used. I think Spellbomb is currently great as a way to deal with graveyard decks without going down a card.

I feel like Samurai has been mentioned on every Maverick Monthly since I started these articles. Their take on Maverick is really cool, playing Eladamri’s Call as an extra way to find the right bullet when needed. Call is really nice as it has great synergy with Faerie Macabre in the board for instant-speed graveyard hate. Additional removal in Trophy and Decay means you have answers for any threat, while Safekeeper and Teeg make sure your creatures stay on board.

Thoughtseize and Hushwing Gryff are pretty unique in the board of MatsOles list. We see Thoughtseize from time to time – at one stage, it was one of the biggest reasons to splash for black in Maverick. However, the printing of Veil of Summer and cards like Dreadhorde Arcanist has caused some players to pivot away from hand disruption in their board. Still, in the right matchup, Thoughtseize can be instrumental at making sure your opponent can’t combo off before you set up a board state they can’t deal with. 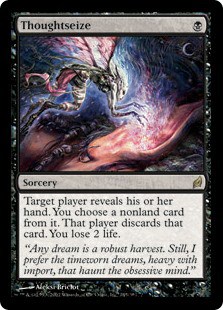 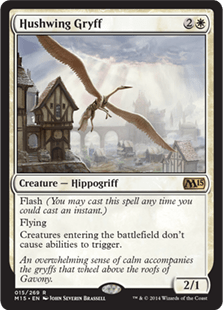 Gryff is really nice against a large portion of the format, from Elves to Esper Hatebears and Death & Taxes to Yurion value decks. Turning off Uro and Ice-Fang are also two big reasons why the Gryff seems great right now. 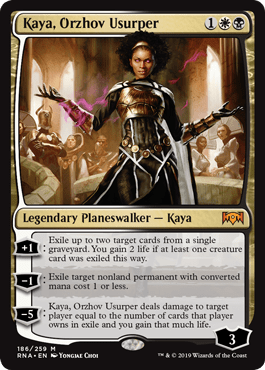 Kaya has been really impressive. I tried her out in GWB Maverick after seeing Connor’s (AKA LoamerBoy) success with her in Loam.

I believe Kaya might even be the best-positioned walker for Maverick right now.

I’m sure there are a few other notable upsides, but a turn-two Kaya applies some really fast pressure on your opponent. I’ve been playing 1 maindeck and 1 sideboard, and I won’t be changing that any time soon.

Sadly no one companion really went hand in hand with Maverick. I don’t believe Maverick is Maverick without it’s 3CMC+ creatures, and we don’t run enough ETB effects to make Yorion work.

I’ve had some success with Jegantha Maverick (thanks to Mark Strassman for the inspiration), but other than being a 5/5 threat, Jeg wasn’t that impressive. If you could use its mana for generic mana, it would be a huge slam dunk. My Punishing Maverick list below:

4-1 with 4c Jegentha Maverick!
T1 Blood Moon in all 3 games M5 meant T5 Jegentha's every game😅
Could have played cleaner during my L – Need to take the time to work through my hands & the mana I need!
Highlights in comments…
Back Wednesday night with Maverick! #MTG #MTGLegacy pic.twitter.com/LabndQcqqb

Maverick was hit during the companion format, but it’s great to see some players stick with the deck and be rewarded in their leagues. I think without Lurrus around, Maverick will return to the format but will have some tough matchups against Snowko and other value orientated decks. Play with your 75. Find some new cards to test and play with to try and keep up with the value other midrange decks are playing with.

Goodluck, stay safe & healthy and I’ll see you next month.