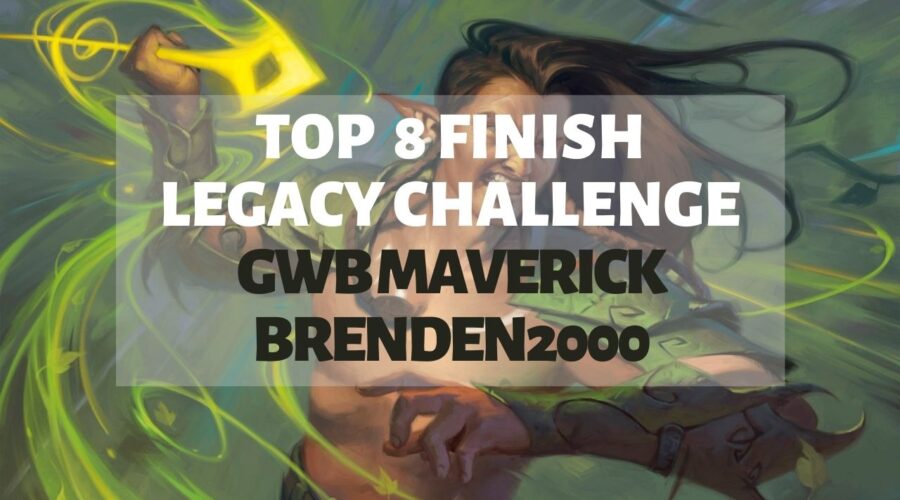 Last weekend, Brenden McCarley took GWB Maverick to a top-8 finish of the Legacy Challenge. He was kind enough to write up some thoughts on the tournament and archetype as a fairly new Maverick pilot.

Hey everyone. My name’s Brenden McCarley, and I’m glad to have the opportunity to write this article about Legacy Maverick. I recently finished in the Top 8 of the MTGO Legacy Challenge last Sunday with Dark (GWB) Maverick.

I’ve been playing Legacy for many years. I’ve got some nice finishes including winning pieces of power, as well as a SCG Open Top 8 with Grixis Delver back in the days of Deathrite Shaman. In all honesty, I always thought Maverick was kind of a silly deck. Why play silly creatures when you could play 3/2 flyers for 1 or get Griselbrand in play on turn 1? Boy, was I wrong!

I was on the Legacy subreddit earlier this week and saw a tournament report by Achilles27 and thought it actually looked pretty decent. I net-decked his list and got a 5-0 in my second MTGO league with it. I’ve been playing a tonne of more leagues since then, and got many 4-1s and another 5-0, as well as the Legacy Challenge Top 8 in that timeframe.

I’ve made a few changes in that time that I’ve been pretty happy with, cutting 1 Once Upon a Time, 1 Forest, 1 Kaya, Orzhov Usurper for 1 Thespian’s Stage, 1 Dark Depths and 1 Sylvan Library.

I’ve really been enjoying the Dark Depths package, as it has allowed me to win a lot of games that I wouldn’t have been able to otherwise! Overall, I was feeling pretty happy with this list in the current meta, after making the changes I had described. 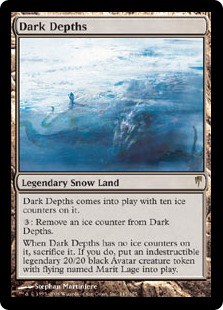 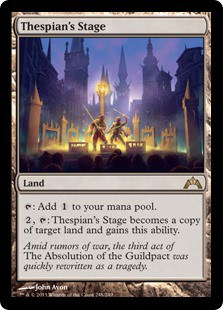 I think Maverick is a strong deck that can play a nice, fair gameplan while also stumbling into wins with Depths combo. With the current build I’ve been boasting, I feel I have a decent matchup verse most combo decks as well.

Some of the weaknesses I’ve noticed with the deck are that some hands can’t ever beat an Oko, Thief of Crowns while in other games, we can deal with it pretty easily. This variance with one of the most popular cards in Legacy is annoying, but it doesn’t seem like this deck has many glaring weaknesses, considering this build has good turn-1 plays vs combo decks.

Round 1 vs. GWB Maverick

How I consider the matchup: Even

Our first round of the day was a pretty rough one with the Maverick mirror. We traded resources for a bit in game 1, then I fell behind due to an uncontested Knight of the Reliquary, and a Plague Engineer sealing the deal.

Game 2 was a lot more back and forth, but they had more removal than I did. Ramunap Excavator + Wasteland denied me of enough resources that my opponent could get the job done.

Overall, this match felt a bit back and forth, with me just drawing less removal and being on the back pedal.

Round 2 vs. BUG Shadow

How I consider the matchup: Slightly favored

Game 1: I was able to answer their threats and they were able to counter / remove most of mine… then an Oko hit the board. Luckily for me, I naturally drew into the Depths combo and they couldn’t beat a 20/20 on end step.

Game 2: I mulled to 5. After getting my Noble Hierarch countered by Daze and getting hit by Wasteland twice, I had an empty board with a pair of Death’s Shadow staring me down.

Game 3: My opponent played a turn 1 Delver and I wastelanded their land. They never drew another one that game, and I won with Knight of the Reliquary pretty easily.

How I consider the matchup: Unsure

Game 1: I played Thalia turn 2 and played Knight of Autumn turn 3 to destroy a Sylvan Library. Kaya, Orzhov Usurper was then able to interact with their graveyard, and 2 turns later I won with her ultimate and creature beatdown.

Game 2: I play Leyline on turn 0 and Green Sun Zenith for Dryad Arbor on turn 1. Turn 2 I cast Knight of the Reliquary into turn 3 Ramunap Excavator. Wasteland twice was too good for them to beat and we won a few turns later. This match felt pretty easy, but I played verse another Lands deck that ended up beating me fairly easy, so I’m not entirely sure how this matchup tends to unfold.

Round 4 vs. GB Depths

How I consider the matchup: Favored

Game 1: They made Marit Liege on turn 3 with Crop Rotation for Sejirri Steppe to counter my Swords to Plowshares. Fair enough.

The next 2 games, my opponent goes for the combo relatively early and gets it answered, then I land a Knight of the Reliquary and control the action from there. The matchup felt pretty easy overall – my opponent just caught me with a poor hand for the matchup in game 1.

How I consider the matchup: Unsure

Game 1: I win through Knight of the Reliquary and Scavenging Ooze disrupting their gameplan.

Sideboarding was the same as round 3.

Game 2: My opponent plays Taiga, Exploration, Grove of the Burnwillows, Mox Diamond, Sylvan Library on turn 1. They then Punishing Fire my turn 1 Hierarch and lock me out from there.

Game 3: I lead with Leyline of the Void, which slows them down a fair bit. But they naturally draw the Depths/Stage combo, and I didn’t have an answer for it.

Round 6 vs. RUG Delver

How I consider the matchup: Even/Slightly favored

Game 1: I mull to 5 and play a turn 2 Knight of Autumn and start beating down for the win. My opponent only played a Volcanic Island and a Tropical Island and cantripped 4 times, so I wasn’t really sure exactly what they were playing.

Game 2: I get my Dryad Arbor hit with a Lightning Bolt and my land hit by Wasteland. I don’t have anything in play while they resolve an Oko and win from there.

I brought out the Thoughtseize for 2 Path and 1 Swords to Plowshares for game 3, now that I know they were on Delver.

Game 3: I removed their threats while getting in small beats with Thalia and an Elvish Reclaimer. They landed an Oko but had to keep elk’ing my creatures. I eventually killed Oko, and they died shortly after.

Round 7 vs. UR Delver

How I consider the matchup: Favored

Game 1: I led with turn 1 Hierarch, then used Abrupt Decay to kill their turn 1 Delver and wastelanded them. They never drew another land and we beat them down.

*Sideboarded the same as RUG Delver*

Game 2: I remove a few of their threats and take over with an enormous Scavenging Ooze. This matchup feels a bit better than vs RUG due to the lack of Oko.

Quarter-Finals vs. Maverick (Round 1 Opponent)

Game 1: I have turn 1 Hierarch into turn 2 Hexdrinker and Ooze into turn 3 Questing Beast. Abrupt Decay allowed me to remove their threat and I won easily.

*Sideboarding same as before*

Game 2: I stumbled on mana after getting my Arbor plowed and getting a couple Wastelands.

Game 3: I had to mulligan to 5 and just got outvalued (being down 3 cards). I thought I might be able to win with Hexdrinker at level 3 when they were tapped out, but they had Kaya to exile it.

Overall, I had a lot of fun with the deck and am definitely going to be playing it a lot more in the future. I think I’m going to leave my decklist as it is for now.

With that being said, I love to stream Legacy and I’ve been streaming a decent amount of Maverick recently. You can catch me streaming on Twitch if that’s what you’re into. I just hit affiliate recently, and I’d love to see my channel grow even more.

If you have any questions you want to ask me personally, feel free to send me a message on Facebook. I’m always down to talk shop when it comes to MTG!

A huge thank you to Brenden for coming on the GreenSunsZenith. If you’d like to report a successful tournament, the site is always open to new player content!